In a book full of famous phrases, one of the best known in the book of Romans is, “Nothing shall separate us from the love of Christ/God.” It is an amazing promise and one many of us lean on, especially in tough times. But I wonder if we truly grasp the full meaning of this phrase, especially as it relates to the context in which it is found in Romans 8. It is so easy to hear a lovely phrase like this without really realizing how super-practical it is.

“Who shall separate us from the love of Christ? Shall tribulation, or distress, or persecution, or famine, or nakedness, or danger, or sword? As it is written,  “For your sake we are being killed all the day long;  we are regarded as sheep to be slaughtered.”  No, in all these things we are more than conquerors through him who loved us. For I am sure that neither death nor life, nor angels nor rulers, nor things present nor things to come, nor powers, nor height nor depth, nor anything else in all creation, will be able to separate us from the love of God in Christ Jesus our Lord.”

Paul begins with a list of things that people might think could possibly “separate us from the love of Christ/God.” So how could tribulation, the first of the list, separate us from God’s love? Is the focus on me, that I might turn my back on God and therefore be separated from His love? No, I don’t think that is what it means at all. In fact, the focus is not on us, it is on God. I would like to posit that it makes much more sense to understand this as, “Even if we find ourselves in the middle of tribulation, God still loves us.” It doesn’t matter what is going on around us, God still loves us. There is a heresy taught sometimes that when we are going through tribulations or other bad things are happening to us, it is somehow our fault, and God has turned His back on us. (I am not referring here to tribulations of our own making, like getting a girl pregnant which can lead to a divorce or all other kinds of tribulations, though even in this case, God still loves us.) What I want us to always remember is that no matter what is happening to us, to loved ones or if there is chaos all around us, God is with us, He is still loving us, He has not abandoned us. It may seem like it or feel like it as times, but Paul proclaims that it is not true.

After much study and thinking about what different Mixtec phrases implied, we translated “what can separate us from the love of Christ/God” as, “What can cause God to stop loving us?” Nothing! And at the end of the passage, “And nothing that God has made is able to cause that God stops loving us, for He shows His great love for us through what Jesus Christ, our Lord, did for us.” Video of this article on Facebook. 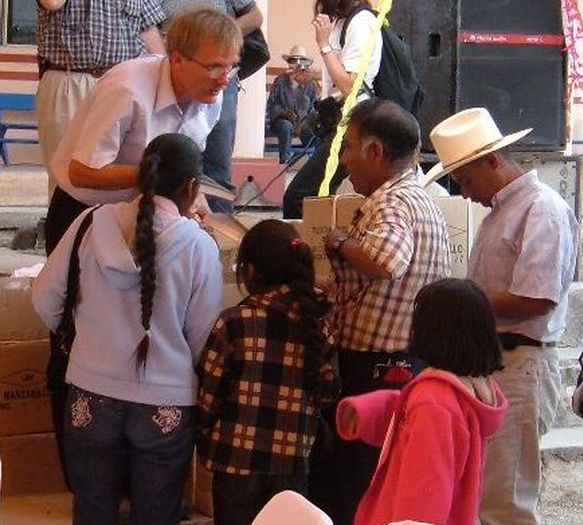 Distributing the Mixtec New Testament after the Dedication Celebration for it

16And from his(Jesus) fullness we have all received grace upon grace. 17For the law was given through Moses; grace and truth came through Jesus Christ. (John 1:16-17)  If you read some Bible versions, they say “blessing upon blessing” as opposed to grace upon grace in verse 16.  To understand what John is communicating to us here, and keeping in mind the context, I don’t believe that “blessing upon blessing” is the best translation of this phrase. (In Greek it says charin anti charitos or grace on top of grace.) If you read different Bible commentaries you will find that they interpret “grace upon grace” in various ways. I would like to propose a different way to understand this phrase, one that is not usually brought out in the commentaries.

The Law as Grace

We usually don’t think of the Law of Moses as grace, but I think that this is the “first grace” John is referring to in this phrase. As we read the Old Testament, and consider what Paul has to say about the Law of Moses, we find that there is a lot of grace in the Law of Moses. If it weren’t for the law of Moses, God would have wiped out all the Israel people and started over, as he once told Moses He was going to do (Deut. 9:13-14).  The Law makes it so that, even though our sins are not washed away, they are covered. Besides that it was given as guide on how to live a holy life before God. Paul tell us that one of the main reasons God gave us this guide was to show us how far we fall from His glory and His perfection (Gal. 3:24) and therefore we need a Savior, a “better” grace. In Romans 3:19-20, Paul says: “Obviously, the law applies to those to whom it was given, for its purpose is to keep people from having excuses, and to show that the entire world is guilty before God. For no one can ever be made right with God by doing what the law commands. The law simply shows us how sinful we are.” A little later in chapter 7, verse 12, he says, “So the law is holy, and the commandment is holy and righteous and good.” He also says that there is a great glory to that law (2 Cor.3:7).

The message of Hebrews: Grace upon Grace

The main theme of the book Hebrews, a topic also found in other parts of the New Testament, is that Jesus is the fulfillment of the Law.  A more recent way of thinking about Paul is that when he was on his way to Damascus he finally understood the true meaning of the Law, where it was pointing to, that it was pointing towards Jesus, and that Jesus is the complete fulfillment of the law. It is important to keep this understanding of the law in mind when thinking about this phrase from John 1, “grace upon grace.” I believe that this message of “grace upon grace” is the message of Hebrews. We have grace through the law, but it is only a starting point.  Jesus completes the work of grace through His sacrificial death once and for all for all to erase our sins. His resurrection proves what He did is real.

We might think of it like a person drowning in the sea, and someone throws them a life preserver. The person is now no longer drowning,  but they are still not where they want to be. They are just there, and, while alive, still floating in the water. They are experiencing grace, the life preserver, they are surviving, but it isn’t where they ultimately want to be. What they now need is to be taken up to the promised land.

That, in a nutshell, is the message of Hebrews, and in the same way, John in 1:16 is telling us this: We received grace through the Law, but now, through His fullness, we have received complete grace. We first had this grace that kept us from being destroyed by God for our sins, for He covered our sins from His sight. His commandments are really good for us if we can follow them, but the problem is we keep falling short of the mark. But now we have this grace fulfilled, which comes through Jesus Christ. Hebrews says it is a grace which is much better than the previous grace. “A sacrificial system became the prefect One who sacrificed Himself once and for all.”  So God changed the sacrificial system, as Hebrews talks about a lot, into the perfect One, the sinless One, who sacrificed Himself once and for all.

Verse 17 is an explanation of this “grace upon grace”  phrase found in vs. 16. 17a says “For the law was given through Moses.” Through Moses we have the Law and the sacrificial system. It covered up sins, we are surviving, but it is not where we want to be, our final destination. However as it says in 17b: “grace and truth came through Jesus Christ.”  It is important to remember that this phrase “grace and truth is also found back in verse 14, which says: “14And the Word became flesh and dwelt among us, and we have seen his glory, glory as of the only Son from the Father, full of grace and truth.”  So in vs. 14 and vs. 17, not only is grace referred to, but so is truth.

The Law fulfilled is grace and truth

In many places in the Bible the word truth also carries with it the idea of fulfillment.  It is the true, the final, the ultimate grace, which we find in Jesus Christ. We first had the grace of the Law of Moses. Then God’s perfect timing was fulfilled and God’s super-grace appears, the fulfillment of grace through Jesus Christ. But it seems that this wonderful truth is a bit obscured, and we miss it when we read translations which say “blessing upon blessing.”

John the Baptist: The Bridge

Finally, the other context of John 1 is John the Baptist. He is the bridge, and there are a number of verses which talk about that (i.e. Matt. 11:13-14). There is the Old Testament, pointing towards Jesus, pointing towards Jesus, it is covering our sins, showing us our need for something better, and even prophesying about something better, proclaiming itself incomplete. Then John publicly reveals the Messiah, the Lamb who takes away the sin of the world. Jesus is the one who is the truth, the fulfillment of the grace God began in the Law, and He also brings the ultimate glory though His death on the cross and His resurrection. Now grace has been fulfilled and it is available to all who call upon the name of the Lord.